What I think makes this event great is the live video coverage.  In past years, the games are analyzed during the round by top UK GMs and IMs as well as the player that has the rest day and isn't playing.  After games are over, the players stop by and go through their games.  Usually the commentary is educational AND entertaining.

The web site is:

First round starts at 6am Pacific Standard Time on Saturday, December 1st.  If you happen to be awake, go to the site and click on the "Live Commentary" link to watch the games in progress and listen to the commentary.

Here is a video from IM Andrew Martin with a preview of the event:


UPDATE: The tournament finished this morning with the clear winner being Magnus Carlsen.  Not only did he win the tournament, in doing so he has broken Gary Kasparov's rating records and is now the highest rated player ever!  Former World Champion Vladmir Kramnik took clear 2nd.

Here is a final Cross-Table of the event.  Click to enlarge.

Posted by Contra Costa Chess at 9:36 AM No comments:

Thanks to some help from Ted Castro, our article about the East Bay Open is now on Chess Life Online. Here is the link:

Posted by Contra Costa Chess at 10:56 AM No comments:

With a little work and some help from Michael D'Alfonsi, all the games scores that were turned in at the East Bay Open have been entered in and a PGN file generated.  All together there are 60 games in the PGN file. You can download it here:

As was pointed out by one of our members, this type of file isn't particularly liked by all, so below are five more of the most interesting games submitted that you can view here on the site.  Enjoy!


Posted by Contra Costa Chess at 3:05 PM No comments:

I am steadily working through the score sheets from the tournament in my spare time and will eventually post a .pgn file of all the games that were turned in and legible.  Until then, here are three games to hold everyone over.


Posted by Contra Costa Chess at 10:06 PM No comments:

Over Veterans Day Weekend, ninety-seven chess players from beginners to masters competed in the inaugural East Bay Open Chess Tournament.  The players traveled from as far away as Las Vegas, NV, San Diego and  Eureka to compete in the event held in Concord, CA at the Crowne Plaza and sponsored by the Contra Costa Chess Club.  The event was divided into four sections by skill level with thirty players including nine masters competing in the top section.  The tournament included five rounds played over three days with each game potentially taking up to five hours to complete.

After five rounds of play, the clear winner of the top section was top seed Grandmaster Enrico Sevillano from Tehachapi, CA.  He scored four and a half points out of five to take home the $1000 first place prize.  Grandmaster Sevillano has been on a tear through Northern California in the last three weeks sharing first in the National G/30 Championship, winning the National G/60 Championship (both held in Pleasanton, CA), winning the Auburn Power Open and now winning the East Bay Open.

During the tournament, a crew was doing a documentary on one of the players, Frederic Lawrence Dutter.  Mr. Dutter is an expert level player but has not played in a tournament in well over ten years.  The documentary is following his comeback to the game.  During the tournament he started off strong with two points in his first two games but then struggled in his remaining games.

The other three sections of the tournament had clear winners as well.  Taking first in the Under 2000 rating section was Alexander Mariano with four and a half points out of five points.   The Under 1600 section was won by local chess coach Nenad Zagorac and the Under 1200 Section was won by Darmawan Ali Effendi.  (A complete list of winners may be found at the end of the article.)

After the conclusion of the event, a Speed Chess Tournament was held.  In speed chess, each player has only five minutes for all the moves of their game.  If they run out of time, they lose their game.  This side event attracted seventeen players and was won by International Master Ray Kaufman.  Fide Master Ronald Cusi took clear second place.

The event was sponsored by the Contra Costa Chess Club (www.ccchess.com) with John Michael Treshler playing the role of chief organizer.  The tournament was run by chief tournament director Scott Mason assisted by Pete Klein and John Harris.  The success of the event was quite a group effort with many members of the club (and others) playing and helping encourage others to play in the event.  In particular, we would like to thank the efforts of John Sefton, Jeff Mc Cann, Stewart Spada, Trevor Stearman, Ted Castro, Emmanuel Perez and Salman Azhar along with the chief organizer and tournament directors for making the event a success.

The Contra Costa Chess Club meets twice a week and encourages players of all levels to attend and have fun.  On Thursday nights it meets in Clayton, CA at the Starbucks at Clayton Rd. and Yagnacio Valley Rd starting at 6:15pm and on Monday Nights it meets in Walnut Creek, CA downtown at Cafe La Scala starting around 7pm.

After the main tournament was over, 17 players slugged it out in an unrated Speed Chess Tournament (G/5).  The speed chess event was 5 rounds with two games against each player.

The winner of the event was IM Ray Kaufman taking clear first and the prize of $60.  Clear second was FM Ronald Cusi winning $30.

The under 1900 prize was a three way split between Stewart Spada, Micahel J Wang and Bayaraa Bekhtur each winning $10.  The U1500 prize was won by Darmawan Ali Effendi taking home $30.

The crosstable for the event may be found in the results tab.

Special thanks to Pete Klein for directing!


Posted by Contra Costa Chess at 11:04 AM No comments:

Here are some pictures from the East Bay Open over the last weekend.  If you happened to take any, feel free to submit and I will add on to this post with them.  Click on any picture to enlarge. 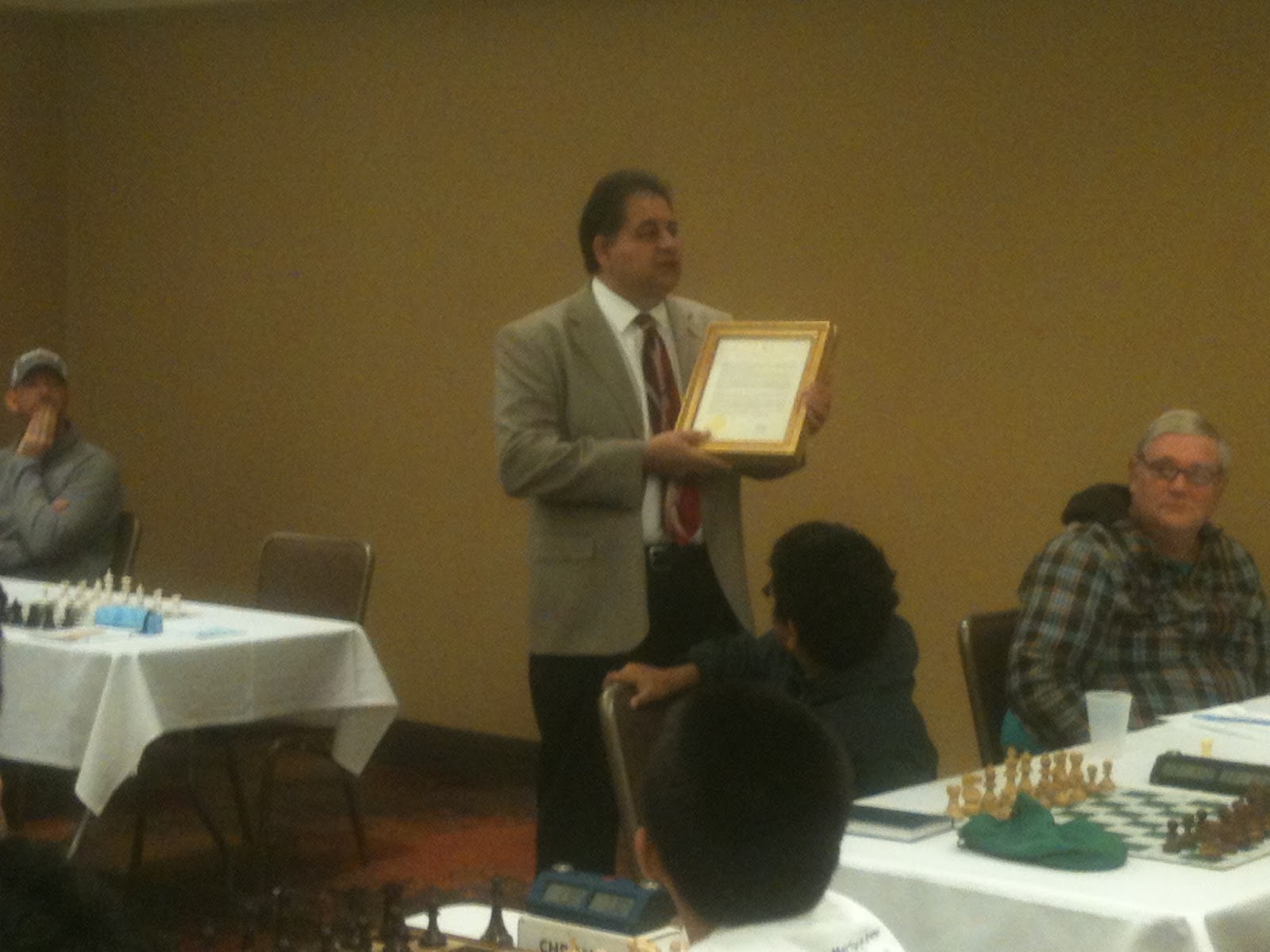 The Mayor of Concord, Ron Leone 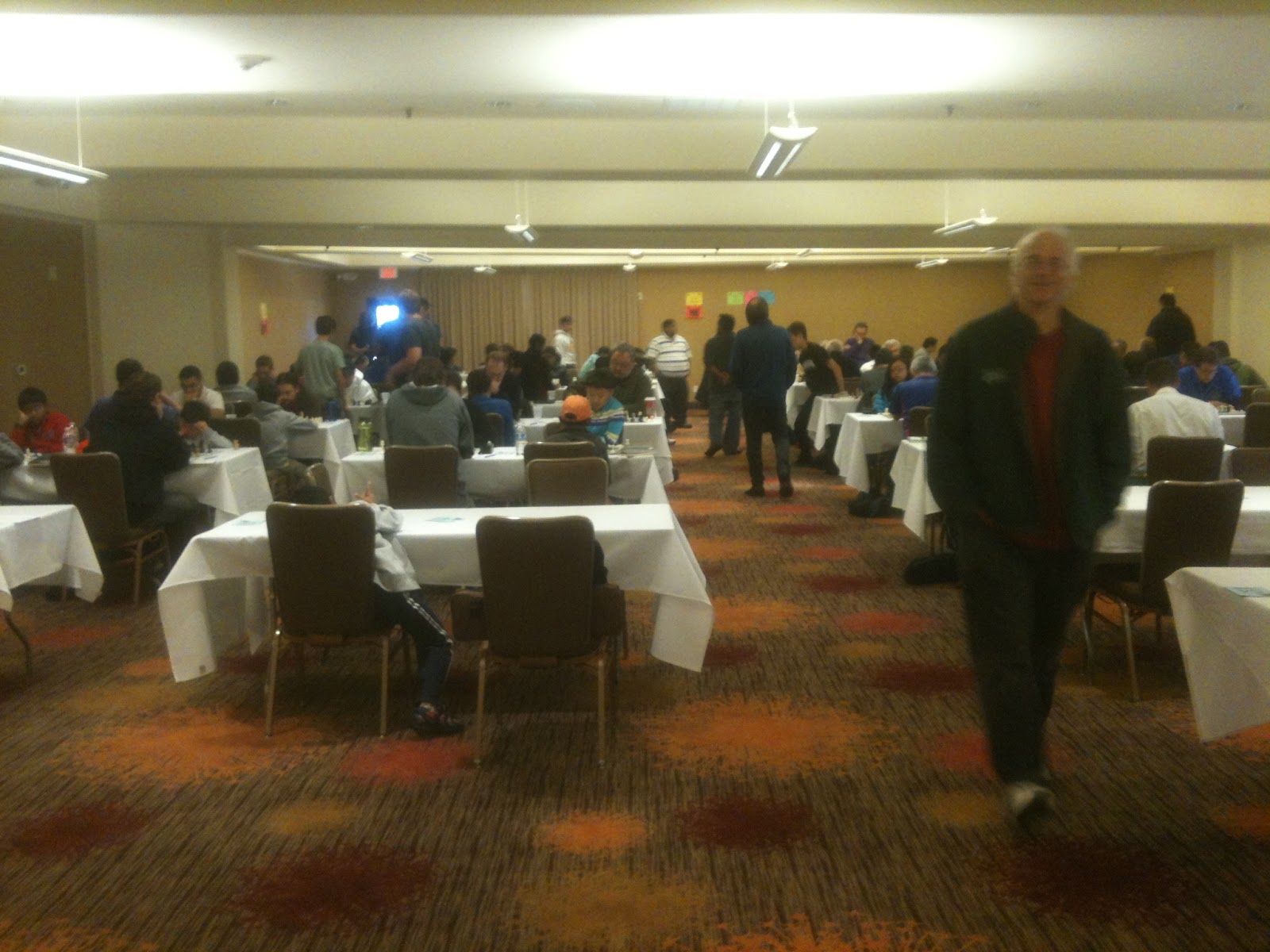 Off and running on Saturday Morning 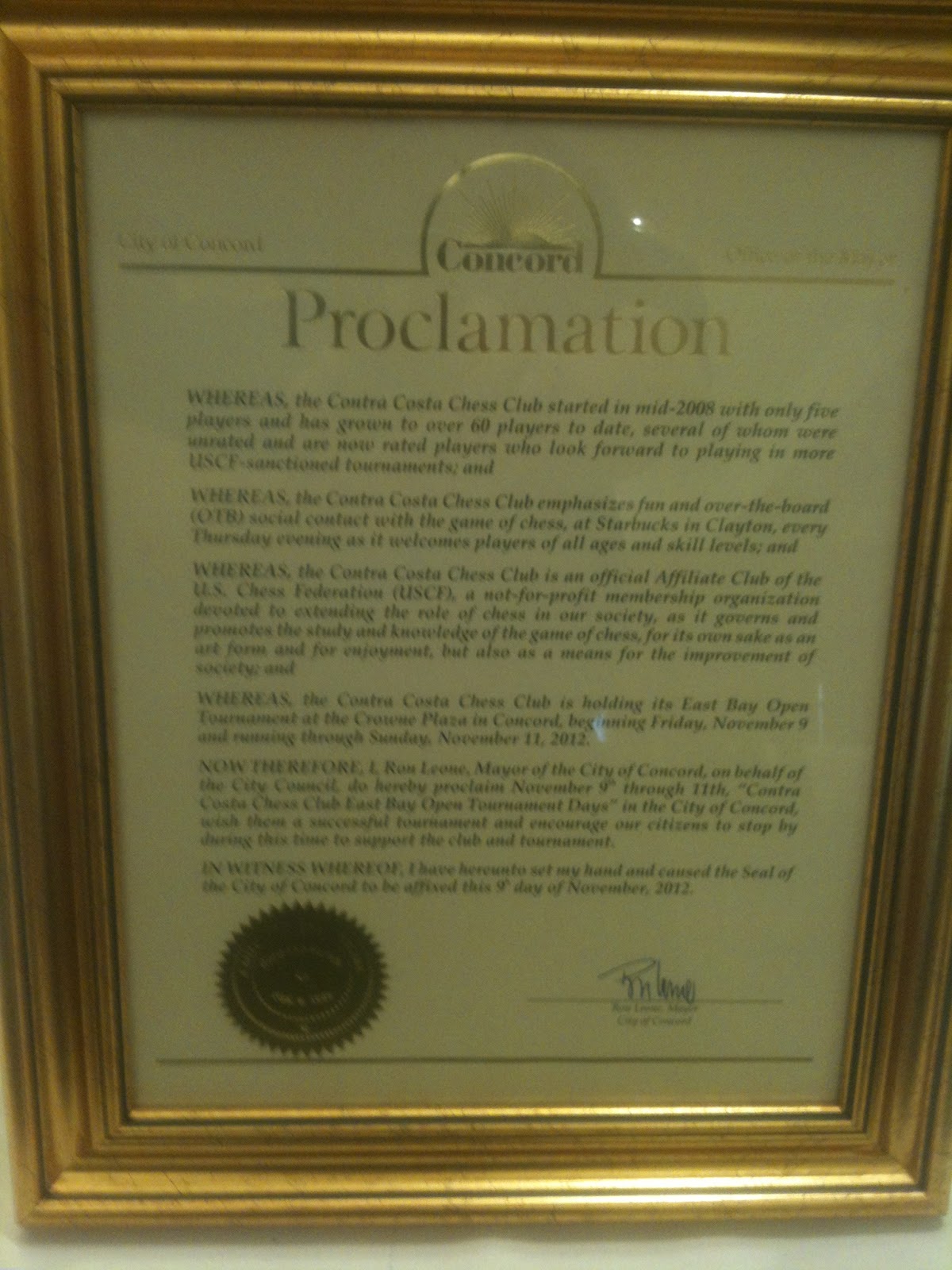 Proclamation from the Mayor, Ron Leone, and City Council of Concord 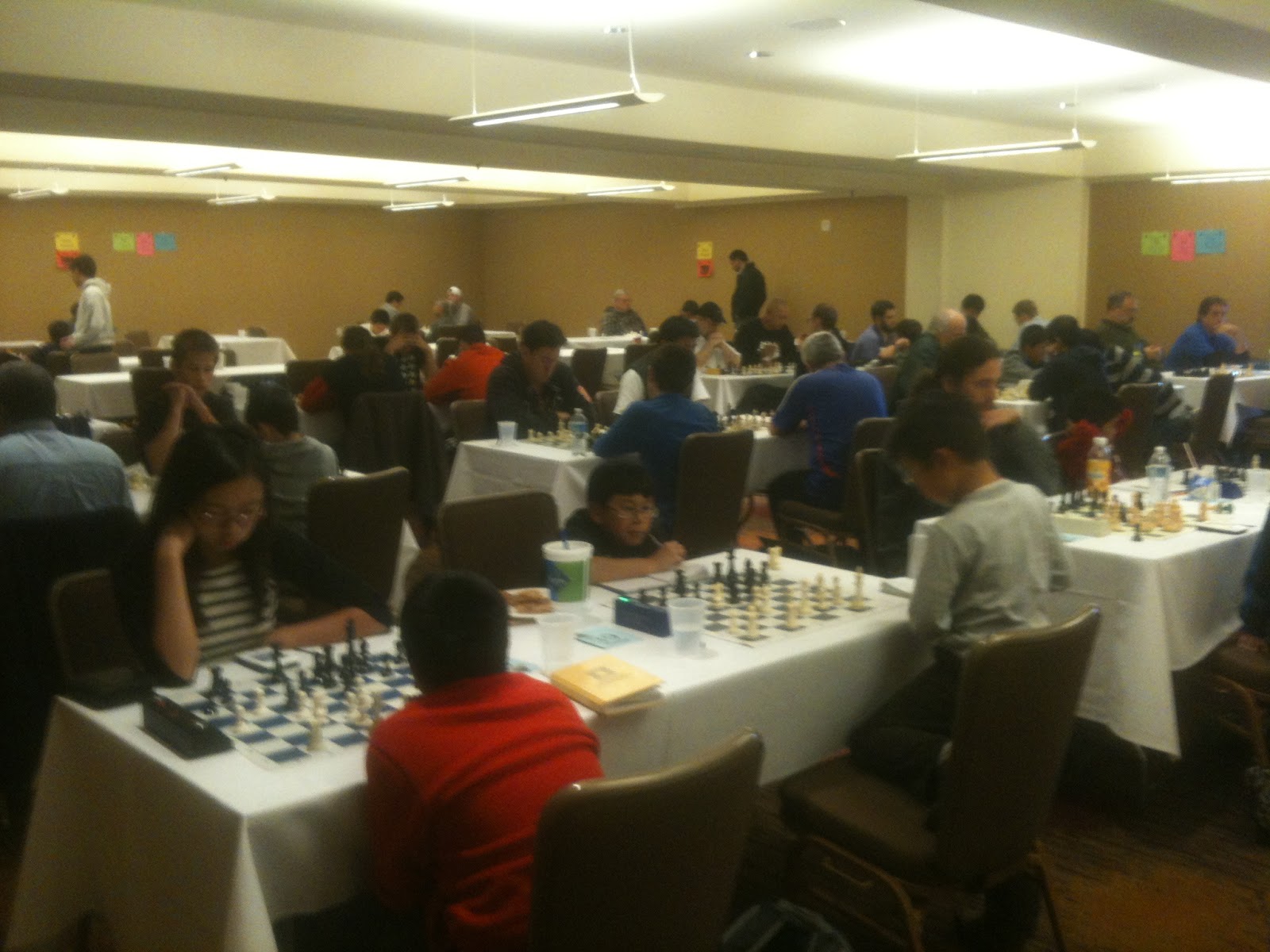 Room from another view 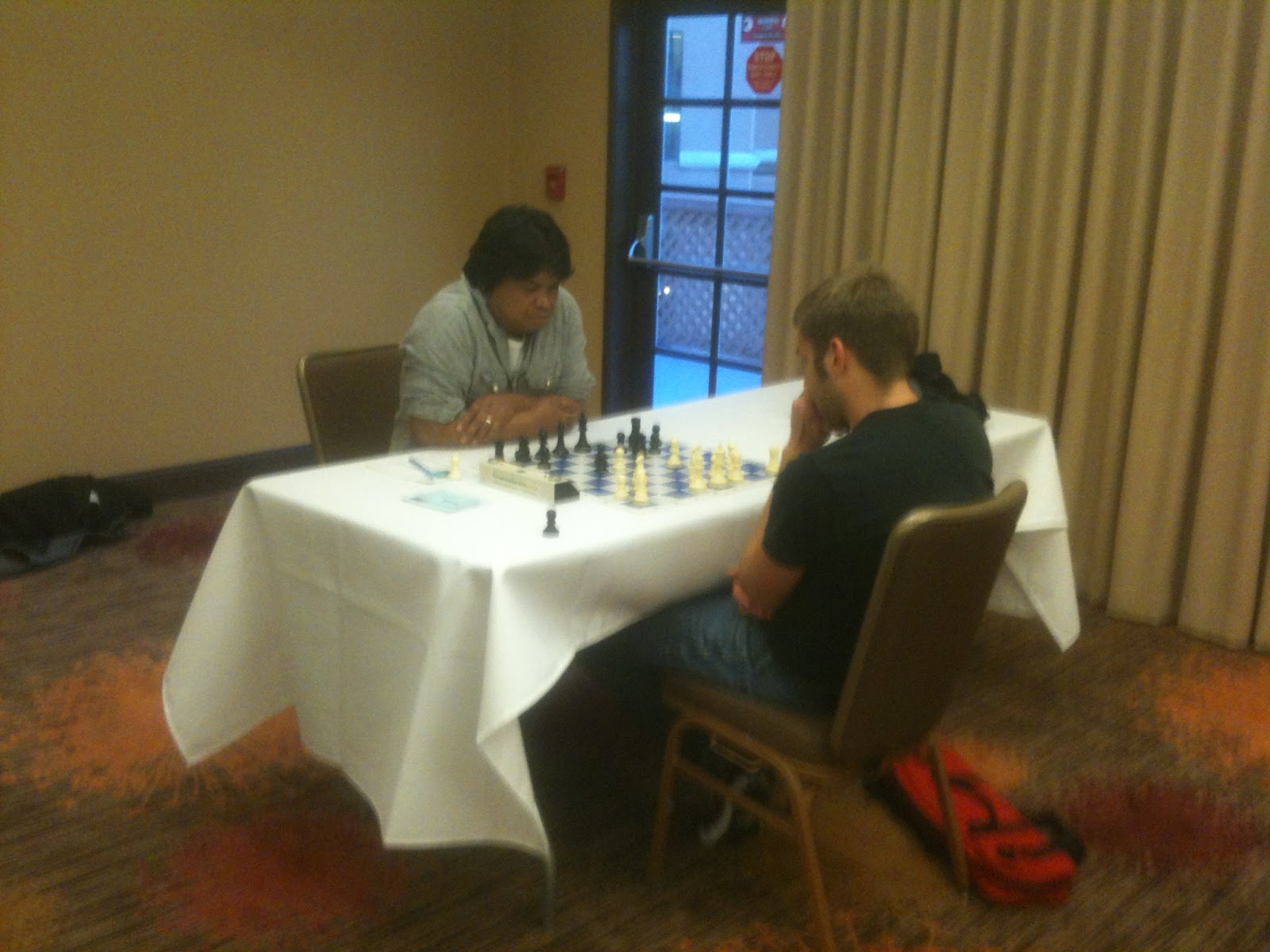 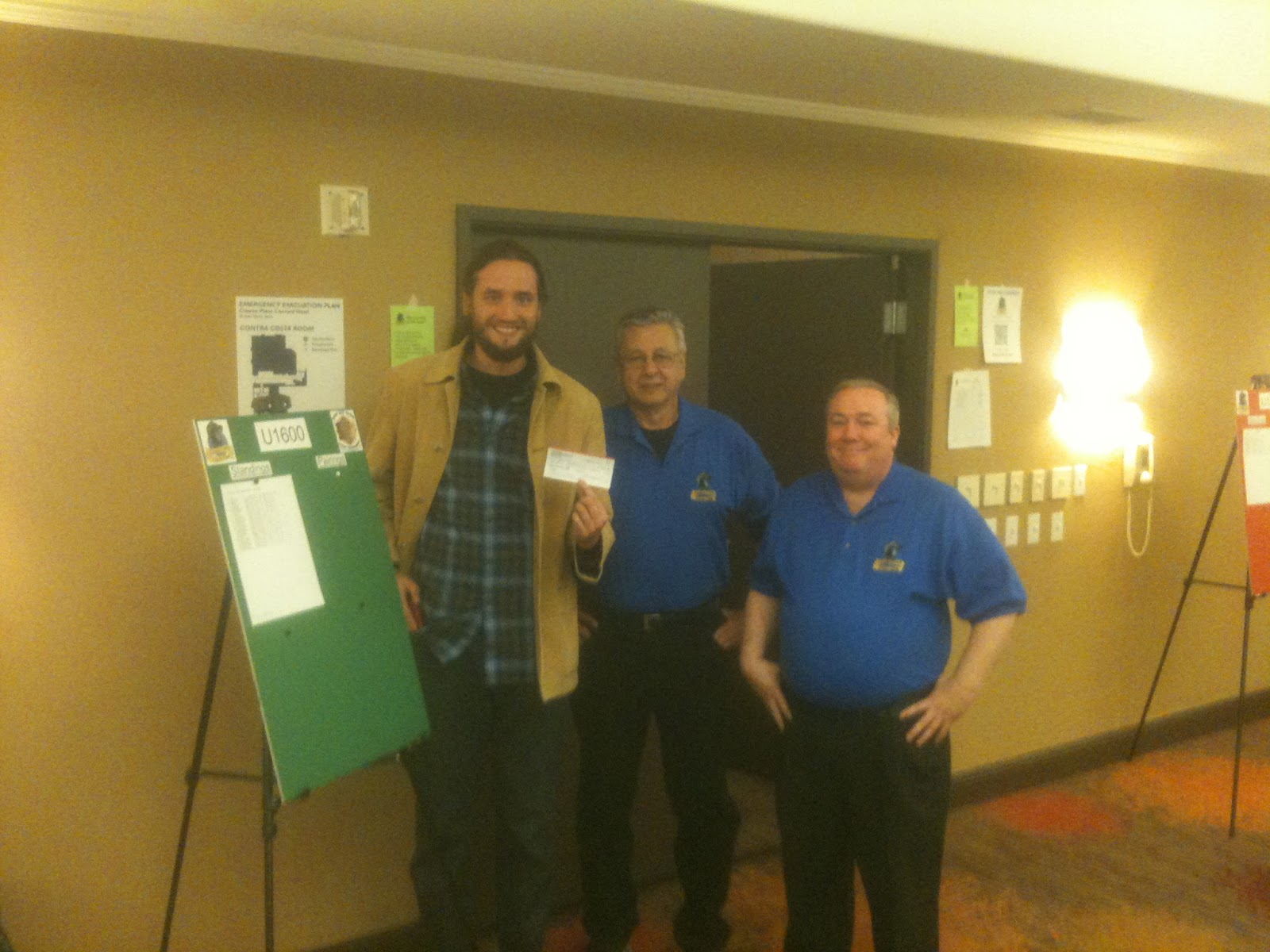 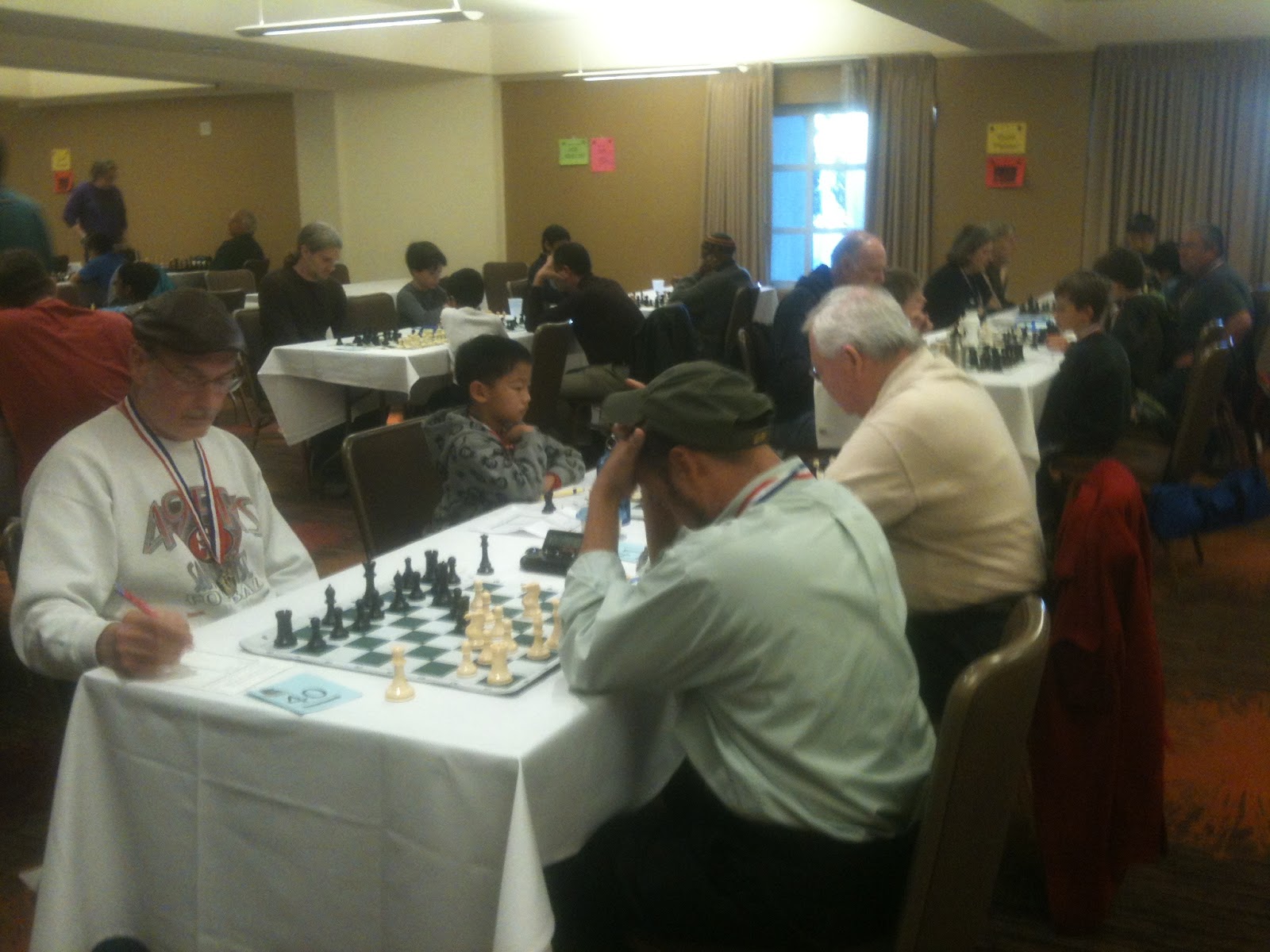 The U1200 Section enjoying their participation medals 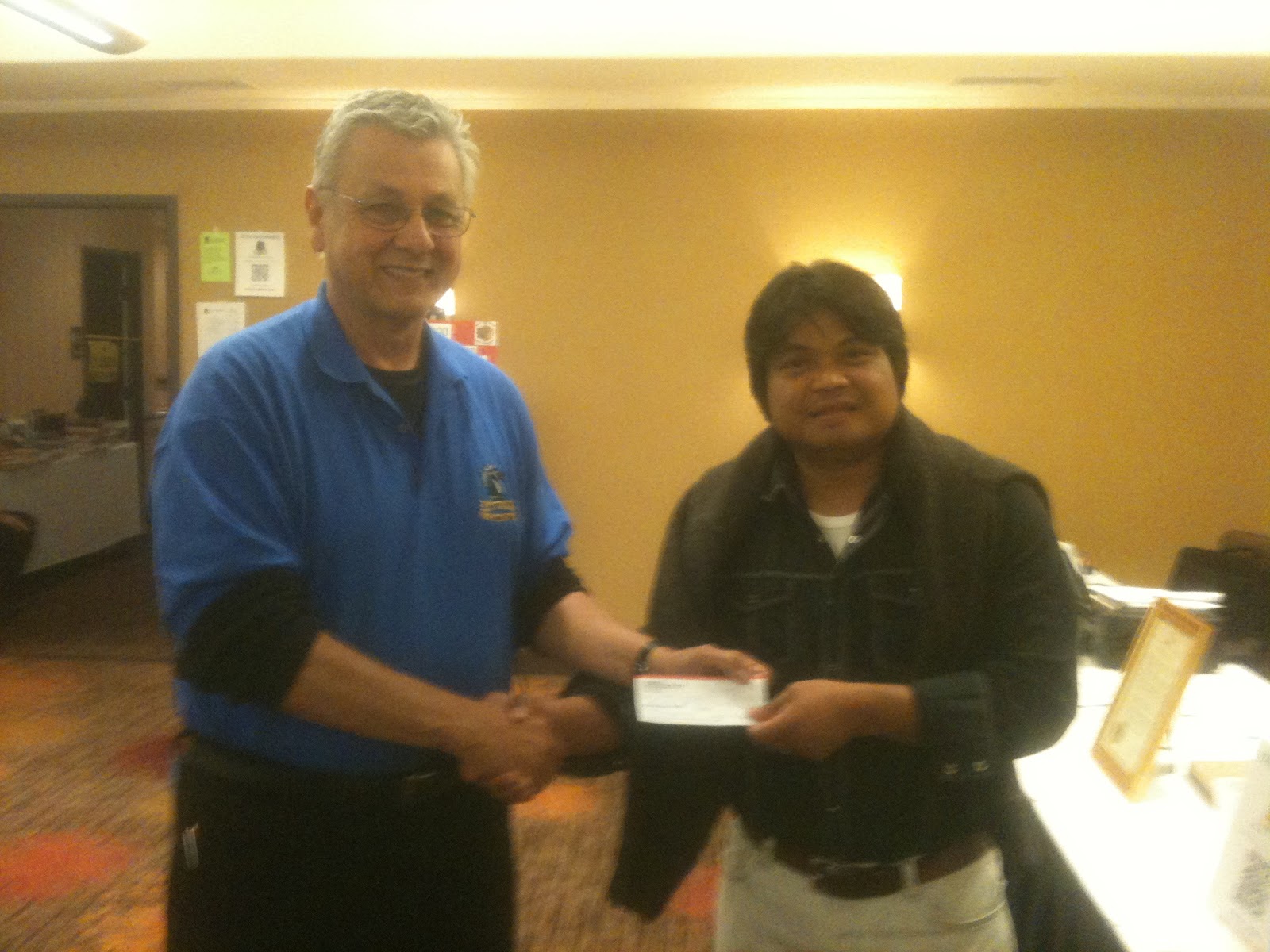 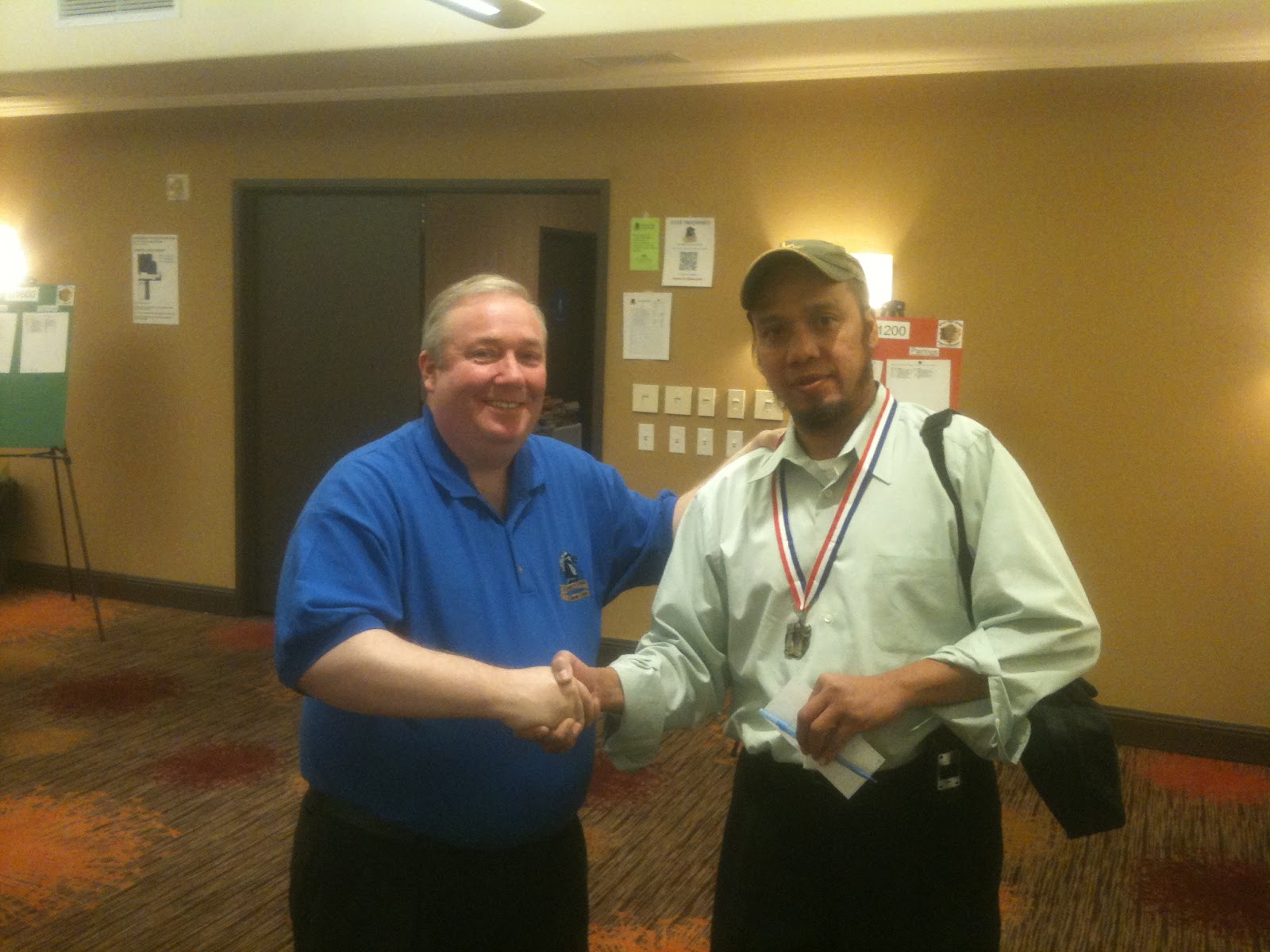 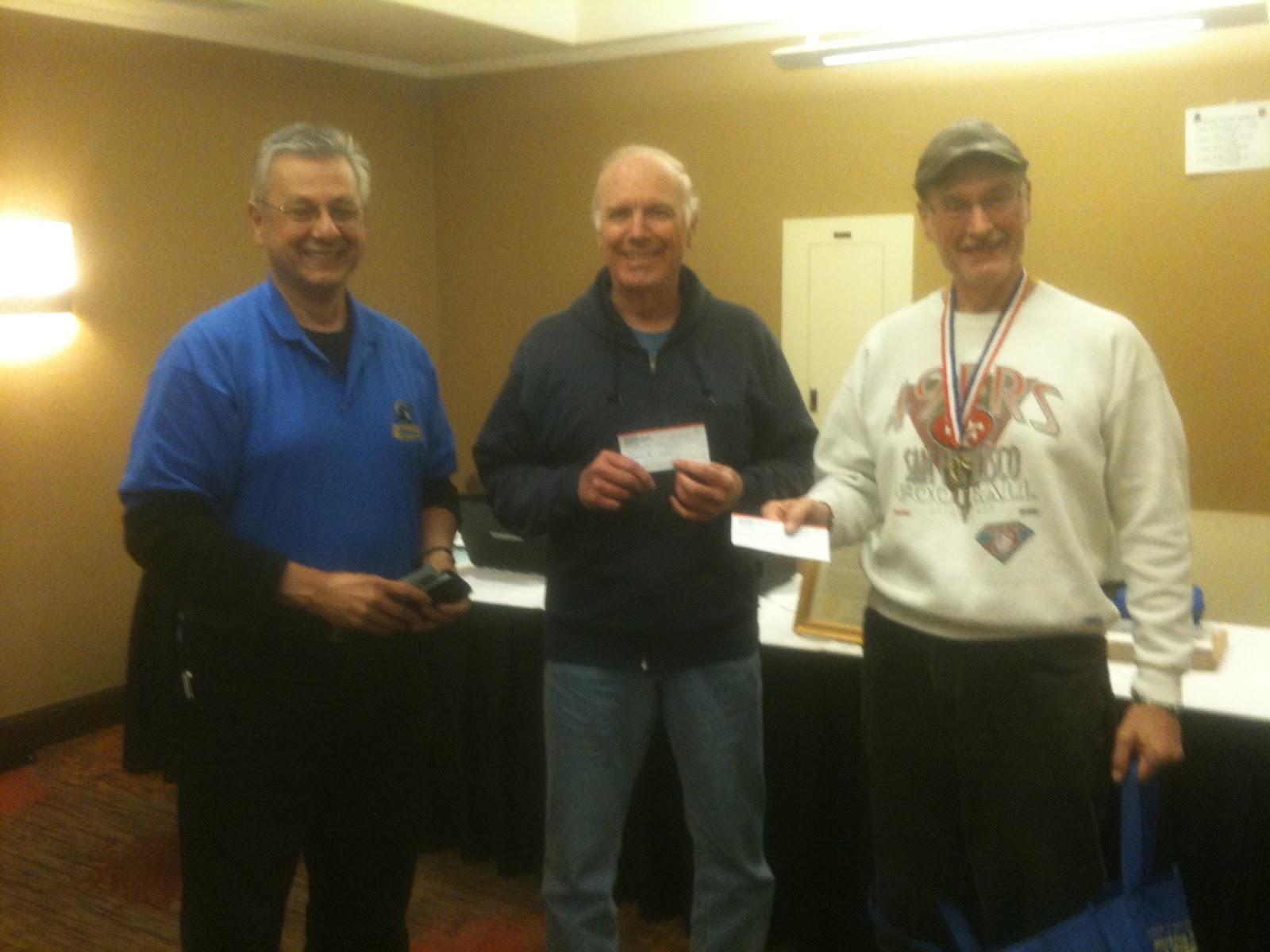 Again, if you happened to take some pictures from the event, we would appreciate your forwarding them on to us for us to share.

Posted by Contra Costa Chess at 6:17 PM No comments:

The Concord Patch has posted an article about the tournament:

We are excited to get some local press for the event!  Special thanks to John H. for getting the information and pictures to the Patch!

Over the next few days, as time permits, we will be posting pictures, a summary and games from the event.  Final standings and prizes may be found now in the "Pairings/Results" tab.
Posted by Contra Costa Chess at 5:07 PM No comments: