This was a solid performance by White with a Bishop Sacrifice on f7 for good compensation. Black walked into a quick mate and resigned on move 14. Enjoy!

If you have any games you would like analyzed or posted, please send them in! (e-mail address is in the "Contact Us" tab)

Posted by Contra Costa Chess at 4:02 PM No comments:

Below is an exciting game where GM Luke McShane from England won a great game playing Black against GM Levon Aronian, the currently number 2 ranked player in the world. In the final position, Black is forcing mate in a few more moves.


For other games from the event, you can see the final standings and replay the games at chessgames.com

UPDATE: With two rounds to go, there were 5 players tied for first. In the penultimate round, Fabiano Caruana from Italy pulled into sole lead with a win over former World Champion Vladmir Kramnik only to lose in the final round to world number two ranked Levon Aronian. This allowed Magnus Carlsen to win the tournament outright with a win in his final game. Magnus was the only player to go undefeated throughout the tournament.
Posted by Contra Costa Chess at 11:07 PM No comments: 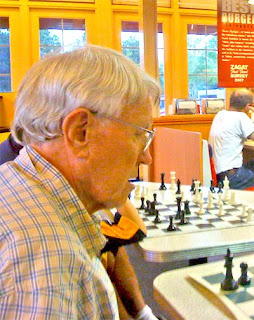 Last Thursday, during our regular club session, we received the terribly sad news that our dear friend and chess enthusiast Rudy Thorwirth passed away.

Rudy had a lot of energy and was quite active, with several interests that included chess, tennis, dancing, piano playing, stocks and bonds, the internet, long walks . . . and probably lots more that we don't realize . . . . . not bad for an 82-year old who died doing perhaps one of his favorite things, walking around the Lafayette Reservoir (on May 21, 2012). I understand Rudy was alone and had a heart attack during his walk, and that he never regained consciousness.

Rudy will be remembered by many in the chess club for his enthusiasm for the game, and for his friendship that he extended immediately with such good humor and gentleness with everyone he would meet. Along with John S., Stewart, and Hossam, Rudy helped establish the Contra Costa Chess Club as a going concern when it was still quite new as a USCF affiliate club at its Starbucks venue. He will be dearly missed, that is for certain.

Thank you to John S. for providing the picture of Rudy.

Exciting game from recent US Championship

Last night at the club we looked at the following game from the recent US Championship. The championship was won by GM Hikaru Nakamura, however this game features a win by GM Robert Hess playing black against GM Gregory Kaidanov. It is an exciting tactical battle where Hess sacrificed his queen on move 20 for three pieces. He co-ordinates his pieces very well and in the end is forcing the win of at least an exchange. Enjoy!

Posted by Contra Costa Chess at 8:23 AM No comments: