For those that are not aware of it, every two years FIDE (International Chess Federation) puts on a Chess Olympiad.  This is not associated with the normal Olympics (not yet anyway).   Each country fields a team of 5 players.  Only 4 can play each round.  Today was the first round.

This year there are 158 teams playing in the open section and 124 teams in the women's section.  Both US teams are off to a great start with 4-0 wins over their opponents (The men played Jordan and the Women played New Zealand).  Both teams were ranked 5th overall by average rating going into the tournament.

The US Teams are: 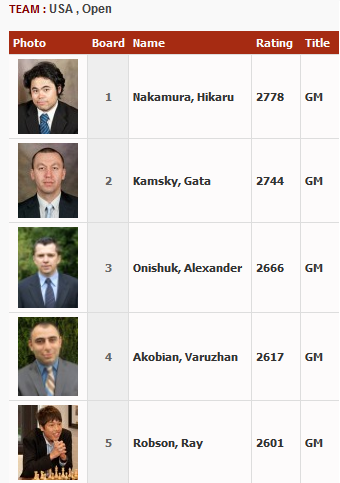 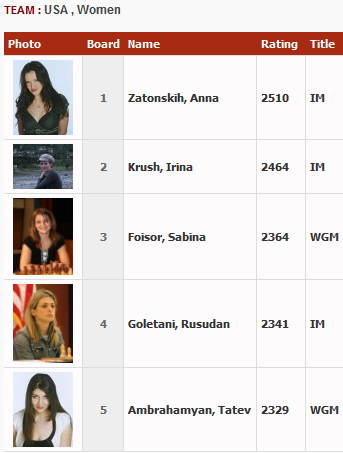 Here is the web site for the tournament.  On there you can view games, pairings and results. Each morning as the round is underway you can also watch a video with analysis of the games in progress.

UPDATE: In the open section, the USA men finished in 5th place.  It was a big win for the nations of the former Soviet Union.  Taking Gold was Armenia, Russia took Silver and Ukraine Bronze.  China was in 4th place showing how strong that countries players have become.

In the Women's tournament, USA placed 10th.  Taking Gold was Russia, China Silver and Ukraine Bronze.
Posted by Contra Costa Chess at 11:50 AM No comments:

Russia is still the country with the largest number of chess masters in the world.  (2nd is Germany)  They recently held their national championship.  After the "normal" tournament was done, there were 6 Grandmasters tied for first.  There was a rapid playoff and the winner was Grandmaster Dmitry Andreikin.  Below is his most exciting win where he shows how to demolish the Caro-Kann.  The fireworks start on move 18 and his opponent resigned 5 moves later.  Enjoy the game:

Posted by Contra Costa Chess at 10:21 PM No comments:


The Great Britain Championship recently concluded.  It was won by Grandmaster Gawain Jones who tied with Grandmaster Stephen Gordon with 9 points out of 11 rounds.  GM Jones won the playoff match 2-0 thereby winning the title.

This is a video by International Master Andrew Martin of GM Jones 11th Round game.  The game was played in the Sicilian Dragon and GM Jones had Black against FM Dave Ledger.

Special thanks to John H. for passing along the YouTube channel with this video.  There are many other great videos on this channel.  Here is the link if you would like to watch some of the others:

www.youtube.com/user/YMChessMaster
Posted by Contra Costa Chess at 10:48 AM No comments: